A Disaster of Pico Proportions! 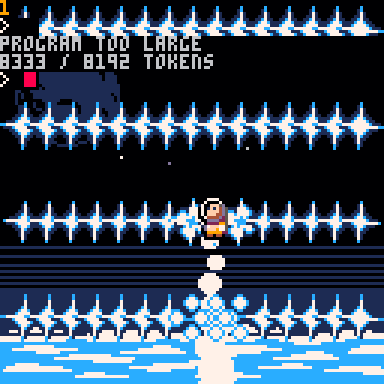 One of the fun aspects of developing for the Pico-8 is dealing with the constraints, one of which is a limit on the number of tokens that you are allowed to use. Unfortunately, this can also bite you in the ass if you're not careful - and it has now bitten me! I've already brought the count back within the limit by removing some unused code, but more will have to be done if the game I have planned is going to fit.

Probably the main source of the problem is the way I've handled the graphics. In an attempt to keep space free in the spritesheet, a lot of the art is implemented as combinations of primitive drawing operations, which is rather code heavy. I'm sure there are tricks I can use to reduce the token count - and I'm sure I've naively used far more than I needed for various things because I'm not used to Pico-8 - but that is a job for tomorrow.

One of the changes I made tonight was to how the waves of collectibles and enemies are spawned. Previously waves were specified by tiles in the spritesheet and chosen at random. There were two problems with this: a tile is too low res (8x8, where I want 15 columns and an arbitrary number of rows per wave pattern), and choosing them randomly could result in transitions between waves that aren't smooth for the player.

Now, patterns are specified in a data structure in code (not helping with my token problem!), and are chosen such that the start of a pattern will match the end of the previous one. They also have a difficulty associated with them, so they can be selected on that basis as well as the game progresses.

I might use bubbles as the collectible for the first stage instead of stars, and maybe some third thing, as yet undecided, for the middle stage.  Stars in the atmosphere?? Ridiculous!! I animated the bubbles tonight, but they're not collectible yet. They won't be functionally different from the stars.